Here are some of my favorite site for Storytime newbies and veterans alike:

Literacy Toolkit - Explains some of the


Posted by Marian Librarian at 2:57 PM No comments:

Wedding Details: The Cake (and everything that comes with it)

We're coming up on a year after my wedding. I had always meant to share some of the little details that we cooked up for the ceremony, and now seems about right. 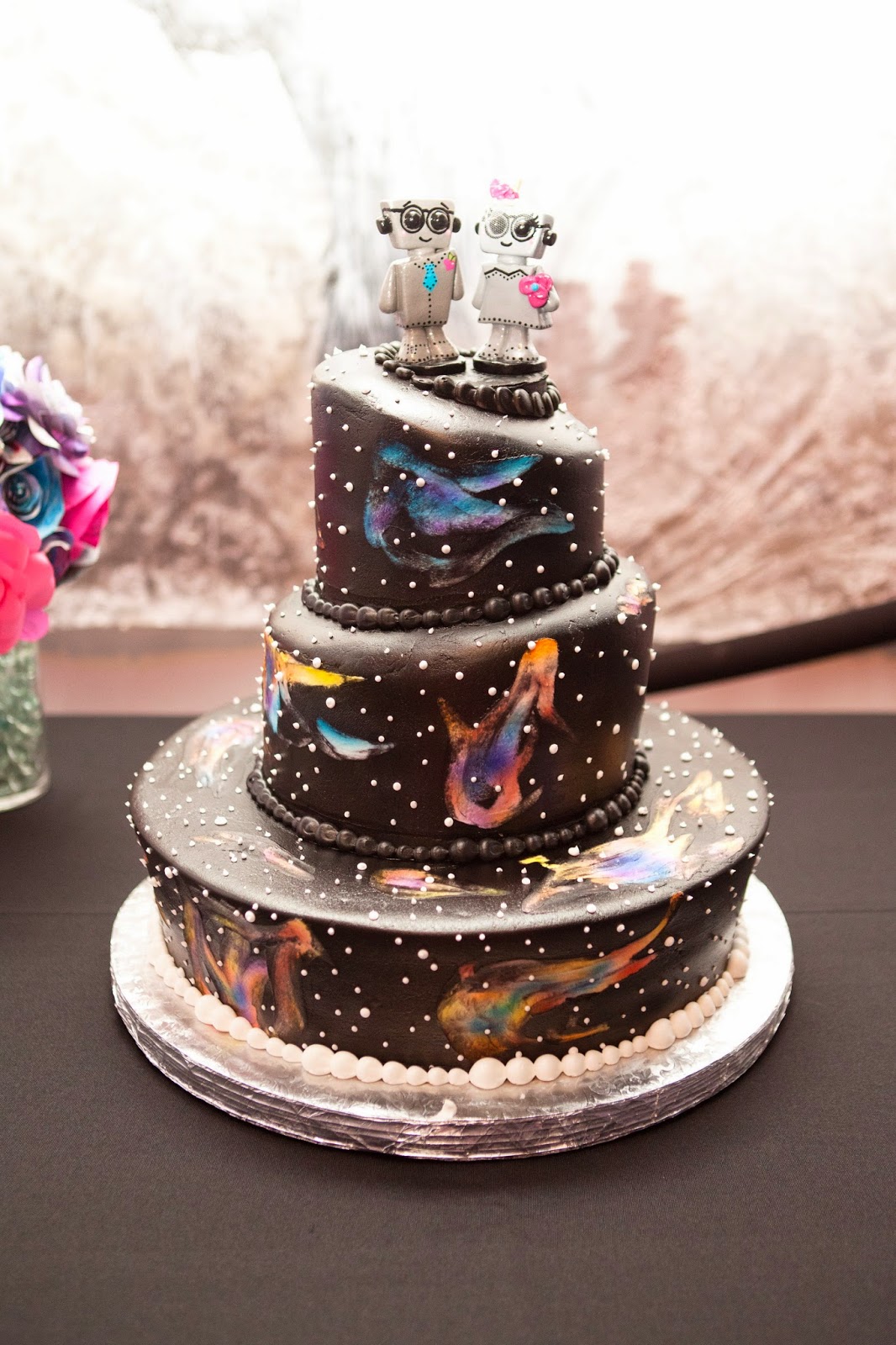 It's from Wedding Wonderland Cakes in Florissant, MO. We talked to Al about a couple different designs before deciding on this one. I loved the look of their "Mad Hatter" cakes, and I wanted something that showed our geeky side. We talked about a lot of different options, but we ultimately decided on our starry-nebula cake.
Everyone wants a one of a kind cake, and I literally could not find a cake quite like this one anywhere.  This was the reference I used:

I can't find anyone to credit it to. If you know the creator of this really cool cake, please let me know. Still, I love the design that Wedding Wonderland Cakes came up with. I wasn't going to go with the Mad Hatter style when we decided on this design, but all said he'd used the different sizes to highlight different nebulas, and I love the result. (Sidenote: Al was part of team blue, that just one "Next Great Baker" on TLC!) 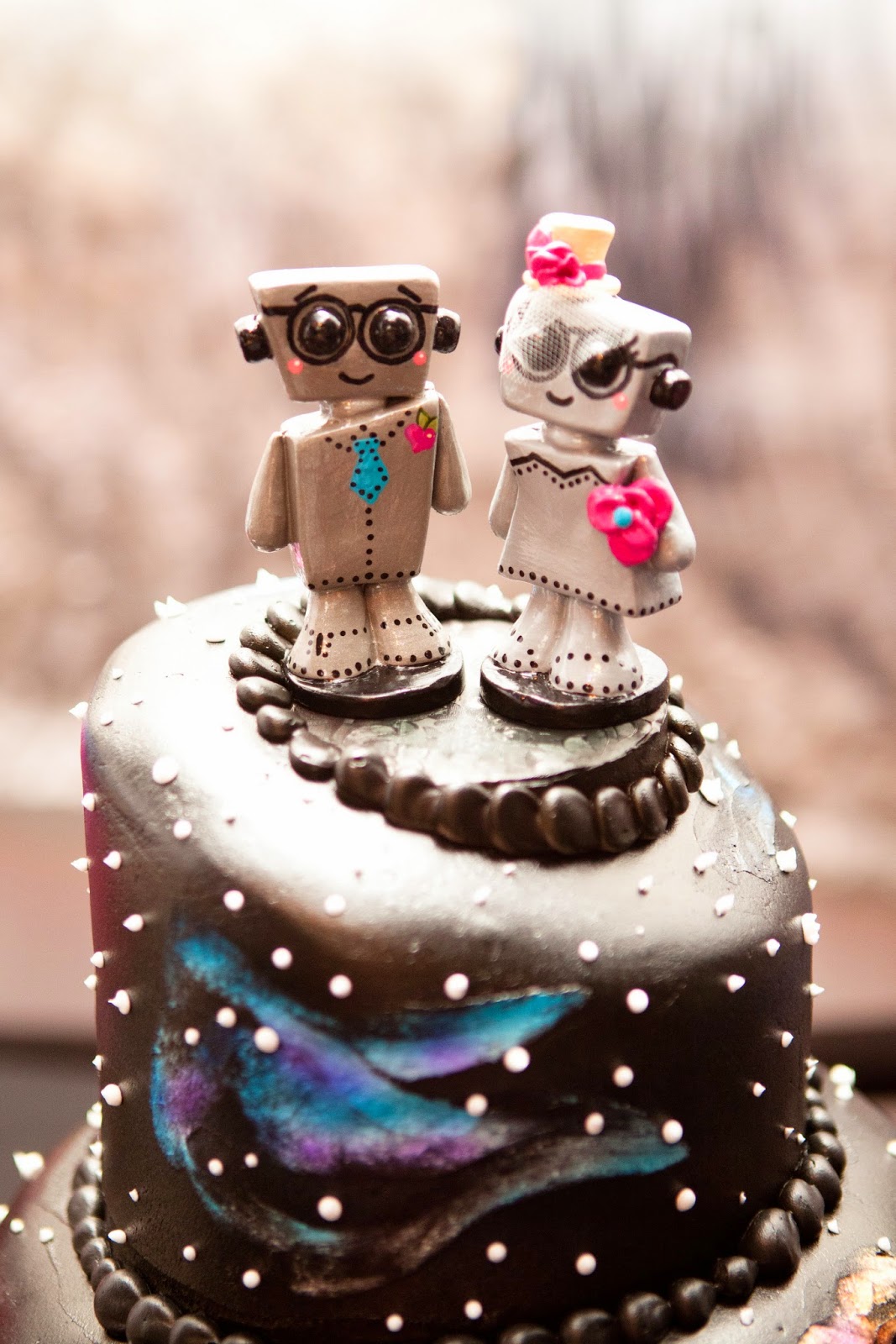 Aren't they so CUTE!! These are from etsy store MyCustomCakeTopper. I love all her adorable designs, but I thought these little robots were just perfect for our Nebula cake. She customized the colors, my little top hat, and gave us both glasses. She was great to work with, and I recommend her to anyone. 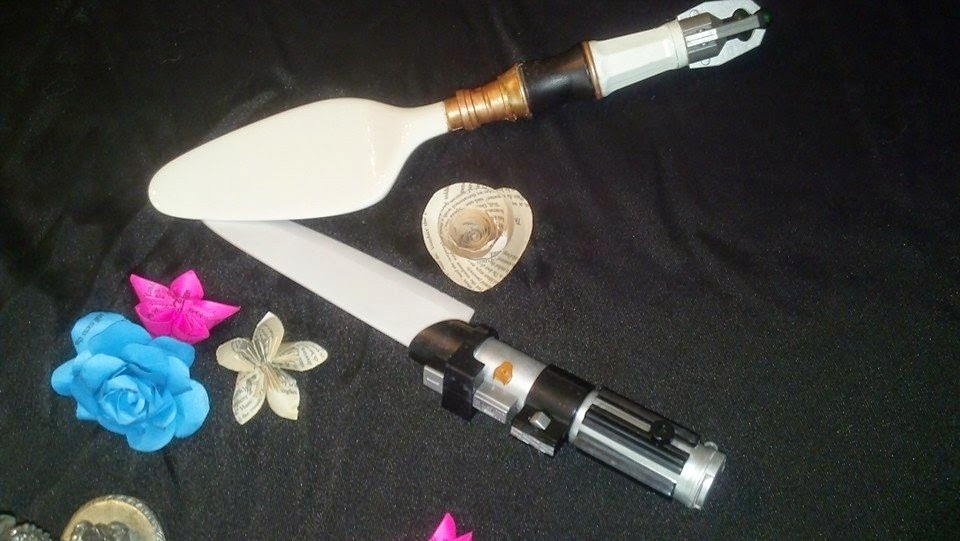 We found this tutorial for making Lightsaber cake knives at offbeatbride. We took it a step further, and made the cake server handle a Sonic Screwdriver. My dad did this for us, so I only only kind of know how he did it, but I know he used the Make your Own Sonic Screwdriver kit. If I get a lot of requests on how he did it, I'll bug him for his secrets.

So that's the cake table! I'll try to do a few more posts about some of my other favorite vendors because I love to give some love to people who worked hard!

Posted by Marian Librarian at 9:54 AM No comments:

Batman turns 75 this year! Doesn't he look great for being part of AARP for 25 years?

Today (July 23) marks what has been officially called Batman's Birthday by DC Comics. However, some sources place Bruce Wayne's Birthday in October or November, so you haven't missed your chance to do a Batman Story Time of your own.

Opening Song: Happy and you know it/Ready for a Story

Sit Down Song: The More We Read Together

First Book: Batman: The Story of the Dark Knight by Ray Cosentino

I love these stories, Ray Cosentino writes excellent introductions to DC superheroes for children. These are far more palatable for storytime than the usual easy readers that we tend to get, and I recommend them to parents all the time.

Song: Happy Birthday to you! (Batman)

Now is where I deviated from Batman, because Batman stories for preschoolers are not thrilling, so we talk about his favorite animal...the bat!

Song: If you’re a hero and you know it !

Other Recommended Reads:
The Day I Lost My Superpowers by Michael Escoffier and Kris Di Giacomo
(I love this story, but Batman doesn't have SuperPowers so I guess I will save it for next years SRC!)
Batman: Gotham's Villains Unleashed by John Sazaklis; Il by Mada Design, Inc.
(The only other Batman Story I considered. A little long, but a good introduction to his most famous villains.  The Cosentino book has a small section that's basically the same, so this was cut.)
A Place for Bats by Melissa Stewart; Il by Higgins Bond (Very preachy about Bat conservation, which I was okay with except I didn't want to discuss all the ways humans are killing bats.)
Posted by Marian Librarian at 2:57 PM No comments:

Sometimes you just have to visit those springtime classics.

Book One: The Butterfly by Anna Milbourne and Cathy Shimmen

Song:
A Butterfly is on my toe
Sung to: "Farmer in the Dell"

Insect Song
Sung to: "The Wheels on the Bus"

Can you move with me?
Sung to: "Do Your Ears Hang Low"

Can you wiggle like a worm?
Can you squiggle? Can you squirm?
Can you flutter? Can you fly like a gentle butterfly?
Can you crawl upon the ground
Like a beetle that is round?
Can you move with me?

The Life Of A Butterfly  added 5-19-02 Original Author Unknown
Sung to: "Skip to My Lou"

Closing Song:
The More we get together

Book One: Rain by Manya Stojic


Look Out the Window  Sung to: "Frere Jacques"

Book Two: Are You Ready to Play Outside by Mo Willems

(Use fingers or make umbrella puppets)

Rain is Falling on You
Sung to: "Happy Birthday"

Flower Garden
Sung to: "The Farmer In The Dell"

Goodbye song: The More we get together

Posted by Marian Librarian at 2:01 PM No comments: 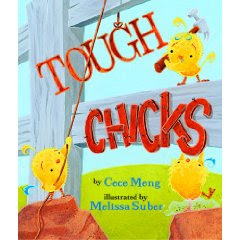 Five and five eggs
Hold up hands
That makes ten
Sitting on top is mother hen
Fold one hand over the other
Crackle crackle crackle
Clap hands three times
What do I see
Fingers around eyes
Ten fluffy chickens
As yellow as can be
Hold up ten fingers.

Over In The Barnyard
(Sung to: "Down By The Station")

Over in the barnyard
Early in the morning,
See the yellow chickies
Standing in a row.
See the busy farmer
Giving them breakfast.
Cheep, cheep, cheep, cheep.
Off they go.
(Substitute other barnyard animals.

Old MacDonald Had a Farm

And: The Chicken Dance!

This week's Craft comes from I Heart Crafty things: 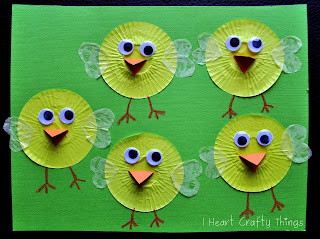 Posted by Marian Librarian at 2:53 PM No comments:

Happy to Be Me Storytime!


This storytime was a request from one of my preschools, and I love it!

The More we read together, the happier we’ll be.

Show Me If You Can

Book Two: I like Myself by Karen Beaumont; Illustrated by David Catrow

I Am Special
Sung to: "Are You Sleeping?"

Some Little Faces
Sung to: "I'm a Little Teapot"
Some little faces I have seen
Some were sad and some were mean
But the one little face with the smile was the best
That was the happiest of all the rest.

Hands On Shoulders
Hands on shoulders, hands on knees,
Hands behind you if you please.
Touch your shoulders, now your nose,
Now your chin and now your toes.
Hands up high in the air,
Down at your sides and touch your hair.
Hands up high as before,
Now clap your hands--one, two, three, four.

Tony, Tony and his sister Eileen.  Point to your toes, knees, toes, knees then lean to the right.
And Eileen loves Neil and Neil loves Pat.  Everyone lean to the right, kneel and pat your shoulders.
But Pat still loves Bob. Pat your shoulders and bounce your head back and forth.
And there's Russell and Skip.  Standup, wiggle your legs then skip in place.
This song is silly, but it's hip. Make a silly face then stick out your right hip and point to it.
How it ends, just one man knows. Turn and point to your bottom.
And guess what (what), it's Tony Chestnut.

Closing Song: The More We Get Together

Recommended Reads:
Hello my Name is Bob by Linas Alsenas
I'm Not by Pam Smallcomb and Robert Weinstock

Posted by Marian Librarian at 6:43 PM No comments: